Let’s have a look at what happened during the 8th season of Clan Wars, the first season since we modified the competition’s scoring system.

Didn’t pay attention to the changes in Clan Wars ?

Here’s the patch note we posted about two weeks ago : http://bit.ly/2nEFIkE

Our intent was to reduce matchmaking abuse. And after monitoring the match history of many clans, it clearly appears that season 8 has seen significantly less unfair play than previous seasons. Even though a few players still tried to use arranged matchmaking, the vast majority has played fair and square this season. Congratulations to them !

Certain clan members got their ELO reset to zero and their clan received a warning. If they persist, they will be banned from competition for a determined period of time.

We intend to maintain our efforts in that area and take additional measures to limit even more the possibilities of abuse.

Now, let’s see in detail how clans fared during the season ! 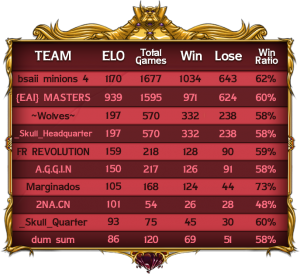 bsaii minions and {EAI} MASTERS high up in the stratosphere

It’s hard to miss the gap separating these two clans and the others (see data above). While {EAI} is second with an ELO of 939 points, the Wolves – right behind them in the ranking – reached by comparison only 197 ELO.

This gap can be explained by bsaii and {EAI} having a good win ratio (see data below), but foremost by the INSANE amount of games played : around 1600 games for each clan, while the 3rd clan played 570 games ! Their motivation truly paid off.

The ~Wolves~ lead the middle pack

Ranging from 150 to 197 ELO, four clans make up what could be called the middle pack, from 6th to 3rd : A.G.G.I.N, FR REVOLUTION, Skull Headquarter and Wolves.

Bottom of the top (duh) : why the opponents’ ELO matters

The last four spots of the top 10 have reached between 86 to 105 ELO, that’s a range of only 19 points. There are however wide disparities in the number of wins.

That’s it for our first season recap on Clan Wars ! We hope you found this article interesting enough, if you want us to use other data or to analyze other aspects of the competition, leave your feedback in the comment section.

Good end of the week to all of you !